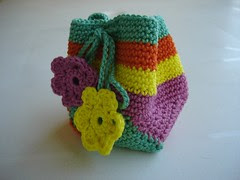 Tiny swirling bag
Originally uploaded by aishakenza
Hi there to everyone who's reading this! I hope you're having a lovely day.

One thing I am determined to do before The Move is to finish off the zillions of small unfinished projects I have scattered around the place. These include (but the list is probably not exhaustive):


Yesterday I did manage to finish this cute little drawstring bag/pouch/purse. It's a birthday present for a little friend of mine who is now seven years old. I hope she'll like it!

I found the pattern on Ravelry (yes!) but I adjusted it quite a lot. You can also get the pattern here. The bag in the pattern is really quite big, so I just reduced all the proportions and this is what it came out like - this one's just 8 cm or 3 inches from top to bottom. I also attached two of my doodle flowers to the ends of the drawstring. I think it's cute. 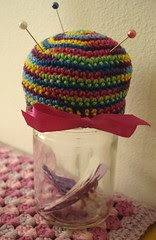 I wonder how many of you are members of Ravelry. It is my most-visited site, I think. I love to browse the patterns - every day there's something new and inspiring.

The other day I came across a pattern for a crocheted pincushion on the top of a jar. Of course I had to make one. I'm always losing my box of pins and so a big jar to keep them in sounded like a good idea.

I got the pattern from The Green Dragonfly. Like the best patterns, it's very simple. The only problem I had was sticking the crochet and stuffing onto the jar lid. As suggested, I used superglue but of course it stuck fast before I could get it straight all the way around, so it looked rather wonky. I searched my ribbon stash and found the perfect solution - a gorgeous fuschia pink ribbon that hides my clumsiness rather well, don't you think?

Now I just have to find my box of pins in order to put them in the jar. Has anybody seen them anywhere?

Actually I didn't tell you yet that we are moving! We'll still be in the same small French town, just a short walk from where we live now. We've been in the present flat for 17 years (yes, seventeen!) so The Move is going to be quite an event. We're going to be very busy over the next month or so and have already started decluttering and collecting cardboard boxes. I'm actually looking forward to it, there's nothing like The Move to put some order into our lives! And maybe I'll come across that box of pins.
Posted by aishakenza at 14:08 3 comments: 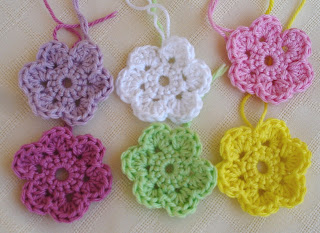 It's interesting the way new patterns take form. For amigurumis, I usually start with an idea, that becomes a sketch, that becomes an amigurumi. But sometimes I just doodle with some yarn and a hook, and interesting things can happen.
Yesterday I was doodling with some Catania yarn and a 2.5 mm crochet hook, and I decided to have a go at designing a little flower. I wanted something quick and easy, and after just one unravelling I got it!
You can use any yarn and matching hook for this project, but I prefer to use a small hook and fine yarn. The flowers in the photo are just 4cm across and would be ideal for decorating a bag, or a hat, or an amigurumi... just use your imagination! I purposefully left long tails of yarn on the flowers so that they can sewn on easily.

You need a very small amount of yarn, and a crochet hook that's suitable for the weight of the yarn.

Make a magic ring, leaving a long tail of yarn. (if you need to know how to make the magic ring, see this video: http://www.youtube.com/watch?v=WLuSVyKvoUg)

Rnd 1 - Make 11 sc into the magic ring, pulling it closed enough for the scs to join, but not too tight that it would deform the circular centre of your flower. Join the last sc to the first sc with a slip stitch.

Rnd 3 - Do not turn, but make 5 dc in the loop formed by the 4 ch, followed by a ss in the same loop. Repeat for the remaining loops until the end. Finish with a ss in the first dc of the first petal. Fasten off.

Wasn't that easy? If ever my explanations are not clear enough or if you need any more info, just leave a comment below :-) 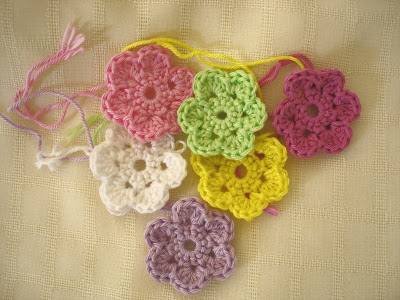 Convert this page to a PDF
Posted by aishakenza at 14:52 42 comments:

Once upon a time there was a pouffe...

A few years ago I bought two orange pouffes to brighten up my living room. They were a perfect size for my children to sit on and very comfy. But years passed, and the poor little pouffes became faded and stained, though they were still just as comfy. Here's one of them, you'll notice that it's seen better days: 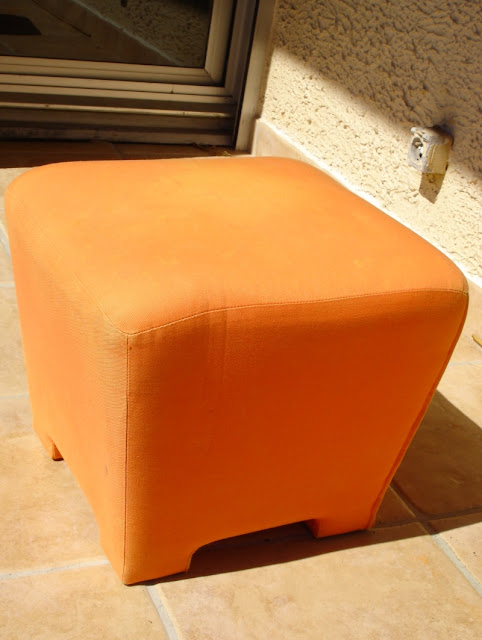 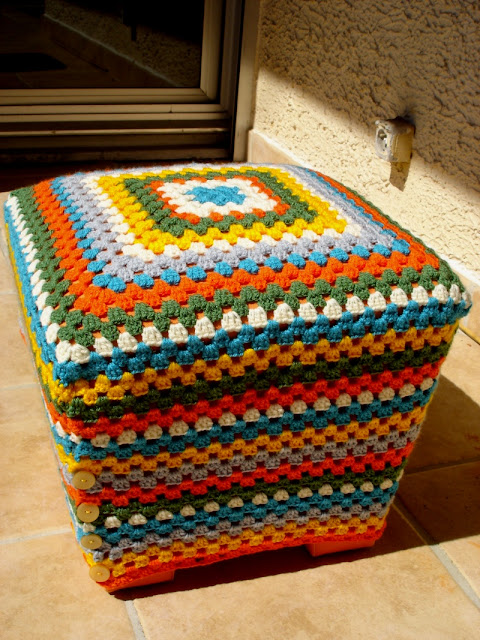 Now I just have to make a cover for the remaining pouffe and then I'm sure we'll need some matching cushion covers too...
Posted by aishakenza at 15:54 7 comments:

Hi everyone, hope you're doing well and enjoying this lovely month of August. I've at last got around to taking a pic of the second-hand goodies I found while I was on holiday in England: 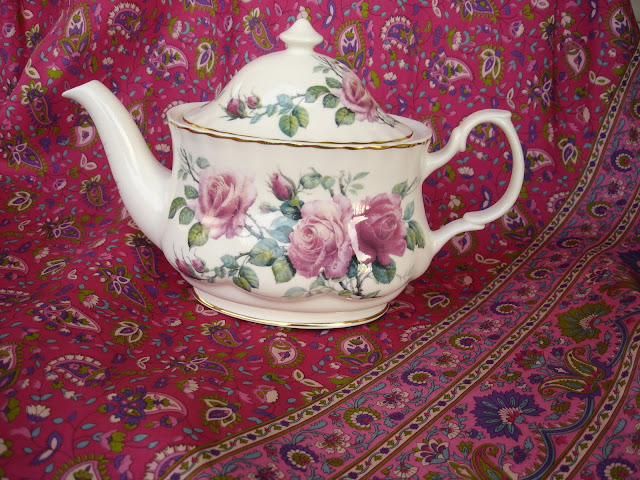 I picked up this lovely vintage teapot from a very small car boot sale we went to on the first day of our holiday. Given the small number of sellers, we didn't think we'd find much, but then I spotted this and at pound I thought it was a good bargain. These days only my OH and I drink tea, and this is just right for two mugs. It is an unusual oval shape and made of delightful bone china. I wasn't so keen on the rose pattern at first, but it's grown on me.

Then the backdrop you can see in the photo is the BEAUTIFUL silk dress I bought from a charity shop for four pounds. It is really gorgeous, isn't it? It looks lovely in the photo, but it's even better in real life, wonderfully shiny and silky, and the colours are amazing.

So the items in the photo above cost the grand total of five quid! Quite a bargain, methinks.

That's the end of this quickie post. I'm very busy working on a new project that's taking me longer than I thought it would so my blog's a bit quiet at the mo. But as soon as I can I'll come back to show you what I've been up to.

I've already been back home for a while after spending a very enjoyable two weeks in the UK. We travelled around a bit and did lots of things, caught up with family and friends and made some exciting purchases.

We went for a couple of days to the seaside because we hadn't seen the sea for ages and ages. It was wonderful. The school holidays hadn't yet begun, so the beach was empty and even though it was too cold to swim we did enjoy spending time on the beach. 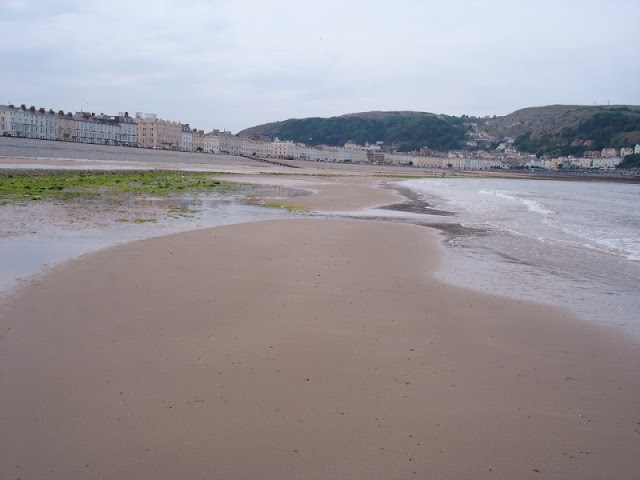 The pebbles on the top part of the beach looked good enough to eat. 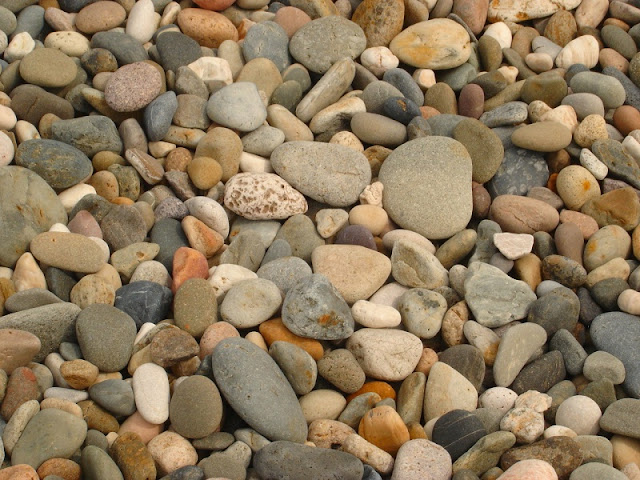 We also took a rather wonky-looking cable car to the top of the hill. It was a bit windy up there but in that part of the world they call it "bracing". 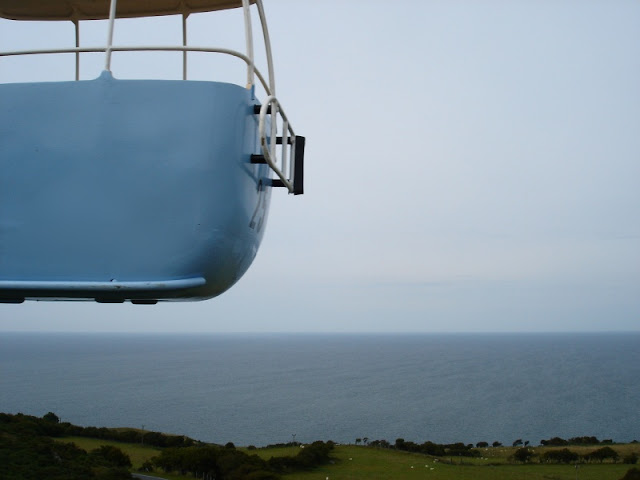 There were some spectacular views on the way up. 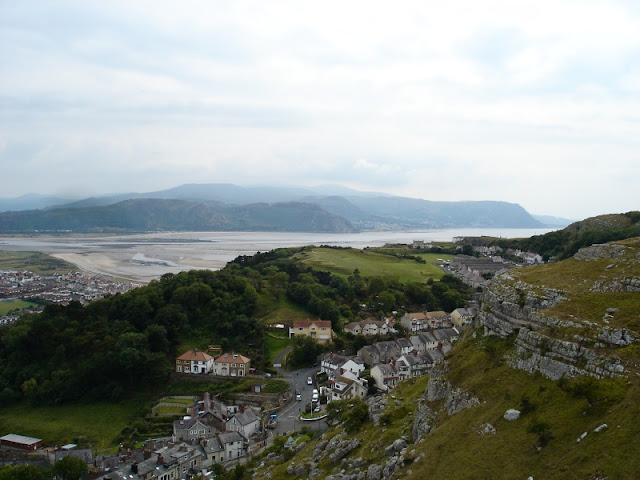 We were lucky with the weather and had blue sky during most of our seaside trip. 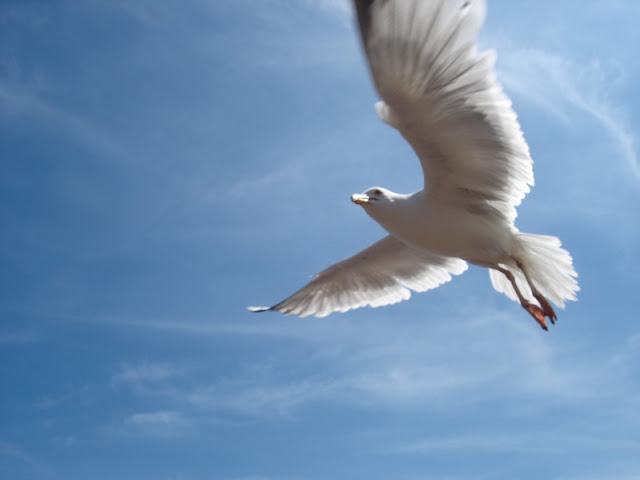 We went to another nearby town where there is a lovely castle and also the smallest house in Great Britain, together with a charming lady in the traditional Welsh costume. 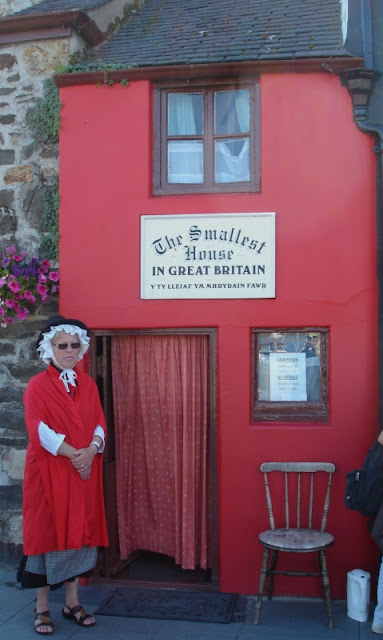 From the castle itself we had a lovely view of the harbour. 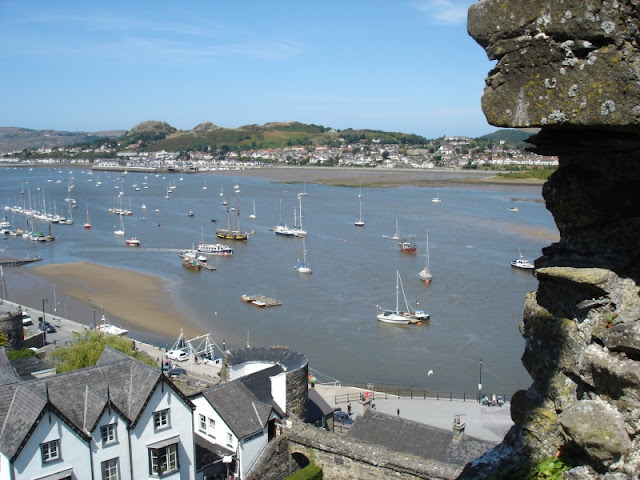 We visited Stratford-upon-Avon, Shakespeare's birthplace, and saw the house he was born in. We ate a delicious cream tea - two huge scones each with a pot of jam and clotted cream, and a teapot of tea which contained three cups of tea. All for £4.95 each. Not bad, especially in a tourist town.

We also visited the butterfly centre in Stratford-upon-Avon where butterflies fly around in semi-liberty - there is a roof so they can't escape! 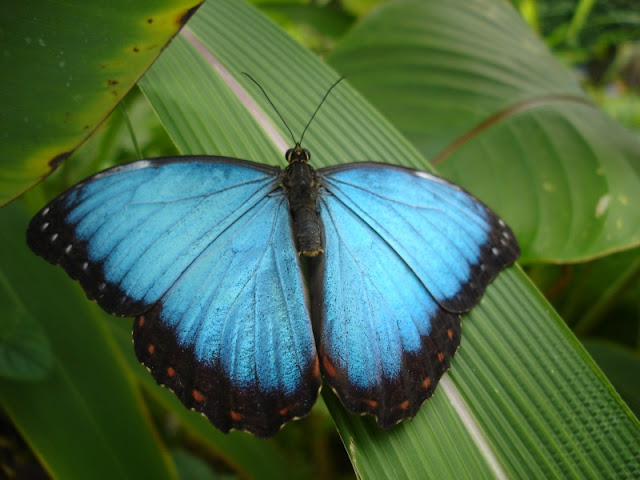 Over the following days we visited Alton Towers and Cadbury's chocolate world too, but I think I've said enough about our travels for now.

To be honest, with all that travelling and eating fish and chips, I didn't really have much time for a lot of hooky business, but I did do a bit:

Lime and beige flower coasters for M, made with this pattern: 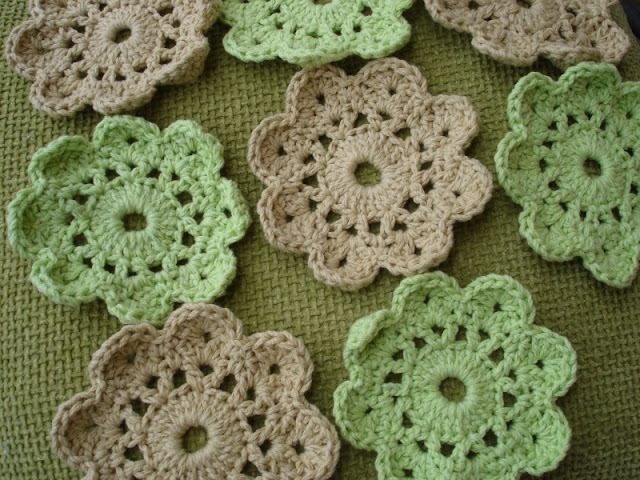 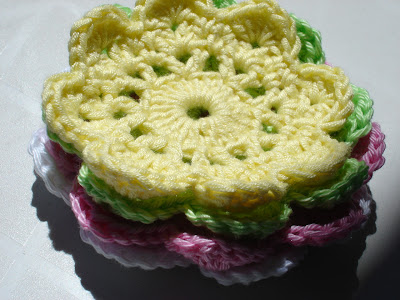 And a little monster toy for A. 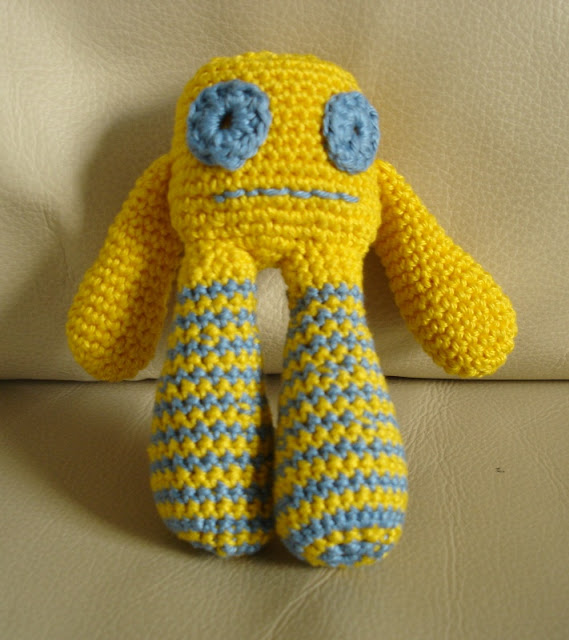 I also bought a crochet magazine and a couple of very good finds in the charity shop, but I'll save those for a future post.

It's nice to be back! I look forward to hearing about what you've been doing during the summer.
Posted by aishakenza at 19:02 2 comments: