Another year is coming to an end, and I want to thank all of you for following me and encouraging me to keep up my blog. When I started it almost two years ago, I never imagined I would still be crocheting and writing new patterns today. I wish you all a very happy and successful 2012.

I know there are already lots of owl amigurumi patterns available, but I like to think that this one is a little different. Its oval bottom gives it a nice cushiony shape, great for cuddling. And the crocheted eyes cannot be pulled off. It's made from the bottom up and the wings are crocheted in as you go. I tried several yarns for this pattern, but the best result by far comes by using a 4mm hook and aran yarn (the owl on the right). I particularly love the Debbie Bliss eco aran yarn and will be buying some more of it to make lots more owls that I hope to sell at our local organic market

Organic yarn and the fact that this pattern does not use any buttons or beads makes this a suitable toy for babies and young children. I always line my amigurmis to stop any stuffing from escaping, and the organic owls have a lining made from a recycled cotton sheet.

-- Note added on 10th July when I found someone had copied this pattern and said she had written it herself:

Are you ready? Here's the pattern:

You can can use one, two, three or several colours for your owl. Just remember to make the wings before starting on the rows in the body of the owl using the same colour so that you don't need to cut off and start over again! I'd even suggest you make the wings first, so that's what I'll begin this pattern with.

Finish off leaving a tail of yarn, weave the yarn through the last 5 sts, pull tight to close.  Weave in ends.

Rnd 1 - With dark colour, sc 6 into a magic circle, don't join with a slipstitch

Pull the ends tight so that the "pupil" looks OK.

Fasten off, leaving a long tail of yarn to sew the beak on to the owl's face.

Body (worked from the bottom up)

Flatten the body to make sure that the wings are symmetrical (there are more stitches at the front, for the owl's tummy, than at the back, this is normal).  If it's not symmetrical you might have to add or remove a sc before of after starting the 2nd wing.

Sew on the eyes and the beak now.

Flatten your owl to make sure that when you join it at the top it will look right. If necessary, sc 1 or 2 extra stitches.

Line (optional) and stuff your owl.

Please let me know if you have any questions or if I have made any mistakes. I always read all comments so don't hesitate!

And I would very much like to see photos of your owls!

Here are some more of mine: 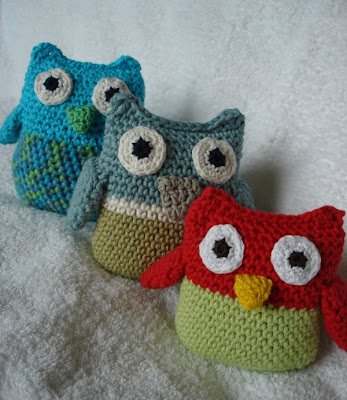 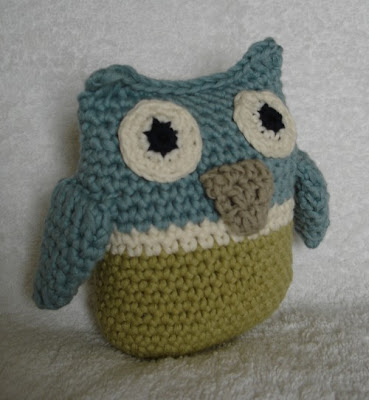