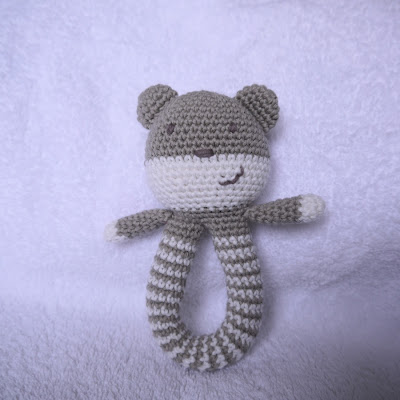 Thank you so much for your interest in my little teddy rattle. Here, at last, is the pattern.

(A word on lining: I line the head with cotton fabric so as to be sure that none of the polyfill will come out. I consider this is especially important when making toys for babies. If you want to do the same, when you get to row 18 of the head, draw around it on a piece of paper and use this as a pattern to cut out two pieces of soft cotton fabric. stitch close to the edge, leaving a gap for stuffing that is also big enough for the rattle insert. Now turn inside out and place it inside the head. Now stuff it and add the rattle insert, sewing it closed by hand.)

Another solution would be to user a smaller hook, so that your stitches are really very tight. I prefer to line.

For now, though, let's get on with the actual pattern.

(Please note that the pattern has not been properly tested, so there might be some mistakes. If you find any, or if any of it is difficult to understand, please tell me in the comments section and I will update/respond to the best of my ability.)

Start with the ears (make 2)

Fasten off, leaving a long tail to sew the ears to the head.

Now is a good time to sew on the ears and embroider the eyes, nose and mouth with contrasting yarn or embroidery thread. To place them, flatten the face, making sure that the increases of rnd 9 are on the edge of the head, giving it the right shape.  Sew the ears on between rows 4 and 7. Embroider the nose in the middle of the face, on rnd 12. Space the eyes evenly in relation to the nose, then add the cheeky smile. Now stuff the head. (See notes above re lining the head before stuffing)

Join in one of the arms by crocheting through both thicknesses together with the rest of rnd 23.

Continue sc until you are at the centre front of the head, then skip 12 sts and sc in the next st. From now on, you will be working only in the remaining 12 sts. Work several rows in colour A, and then add colour B and work in a spiral, changing colour every 12 sts (leaving the yarn to one side every time you change colour - don't cut the yarn!) If you prefer, you can also make the handle in a single colour.


Continue the tube, stuffing as you go. As this part is too narrow to line, I use a very old woollen felted blanket, cut into little shreds, to stuff the handle. Continue until the handle measures approx 19 cm (7 1/2 inches), finishing with colour A, and work the same number of rounds in colour as you did at the beginning of the handle. Join in the second arm, on the same side as the first one (see photo). Finish off the rnd on the opposite side to the arm and finish off, leaving a long thread for sewing. 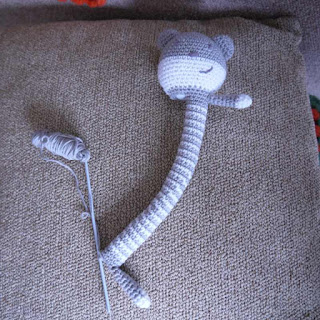 Now make sure you have stuffed the handle enough, then very carefully sew the open part of the handle to the remaining 12 sts of the head.

Don't hesitate pulling on it to make sure your stitches are strong enough. Safety is an issue here! When you're satisfied that the handle is securely sewn, fasten off and hide the ends inside the head.

And there you have a cute little teddy rattle!
Posted by aishakenza at 21:16