I hope you had a great Labour Day yesterday. Here in France it is a national holiday so I didn't go to work, but I did finish off some crochet work. And here's the result, my May Day cushion! (scroll down for the pattern). 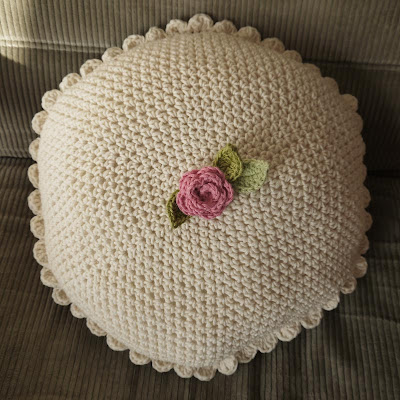 Isn't it just lovely? It was one of those things - I bought the yarn in a sale, then saw a similar cushion on one of the blogs I read, and realised I just HAD to make a cushion with that yarn!

I didn't follow exactly the same pattern as Heather on Pink Milk, who joined her rounds with a slipstitch. I just made two simple hdc circles and crocheted them together with a shell border. Like Heather, I did use the lovely May rose from Attic24 to decorate my cushion.  My cushion is also quite big, so the central rose does look a bit small. But I love it anyway. We needed  new cushion and I think it looks particularly nice on my armchair. 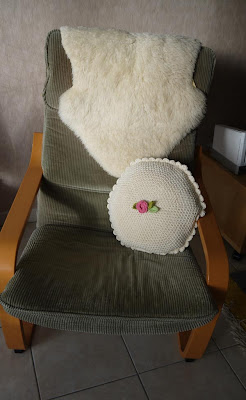 Here's how I made it:

Continue the pattern, increasing the number of single hdc in between each set of 2 hdc until you reach the required diameter for your cushion.

Then make a May rose from the cute and easy pattern by Lucy at Attic24, and sew it to the centre of one of the circles.

You can use a cushion pad you have bought or upcycled, or you could make your own. I made mine from an old sheet and filled it with polyfil. It's 40 cm across and the final row of my crochet circle has 20 hdc in between each 2 hdc. Make sure your cushion pad is washable, as the cover isn't removeable.

For the border, I did the following:

Remember to put your cushion pad in place while you still have room for it! If you have a very fat cushion pad as I did, you'll have to do quite an amount of the border with the pad in situ.

To finish, sew in the ends and you're done!