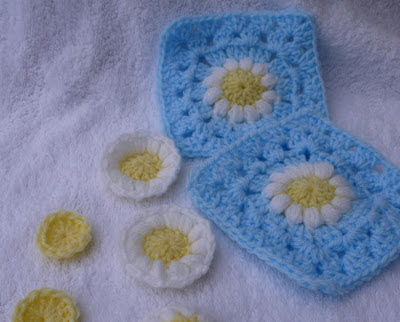 Hello there!
I so love making granny squares. I had great fun with those I finished last week for Knit-a-square. I had another delve into my stash, and came across some yarn I bought on a whim once when I was in the UK. It was so cheap, it's acrylic/polyamide (I think) but it still feels soft and cosy. The colours are a bit too pale for knit-a-square so I decided that I'd make a baby blanket either to give away or to sell.
I'd noticed cute daisy squares on some other blogs, and I decided to make my own pattern. After a few attempts I think I got it, so here it is. I've not yet finished the whole blanket, but I thought you might like to join me :-)

It's best to finish off and sew in the ends after finishing each part (as you can see on the photo).

It may take you a while to get all your puff stitches to the same size. The first ones I made were a bit uneven, but you soon get into the rhythm.

Now the real "granny" part begins. You'll work into the ch spaces between the puff stitches.

And there's your daisy baby afghan square. I can't wait to see how yours work out.  I'll be back with a taa daah moment as soon as I've made enough to join them into a blanket.
Posted by aishakenza at 21:15